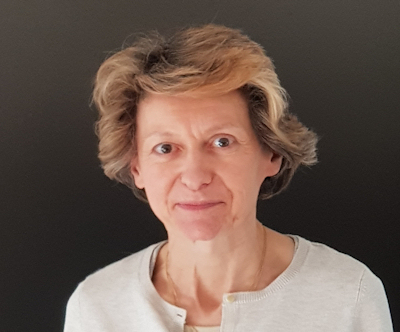 The team is focused on the identification of novel therapeutic approaches aimed at treating not only myelin diseases in the central nervous system but also the inflammation associated with such diseases and other neurological pathologies.
During the last decades, glial cells appeared as central players in both development and function of the nervous system. In response to damage of the central nervous system, these cells are recruited to allow the regeneration of the damaged tissue. The oligodendrocytes repair myelin sheaths for insulating the axons and allowing rapid conduction of action potentials. Astrocytes and microglial cells are essential for tissue repair via their pro- and anti-inflammatory activities. The team is mostly interested in acquired demyelinating diseases including multiple sclerosis and inherited myelin diseases such as X-linked adrenoleukodystrophy. One of the main features of the team is its expertise in both classical pharmacological approaches, gene therapy and biology of glial cells.

The main objectives of the team include
1) the characterization of the molecular mechanisms contributing to the development of myelin, its regeneration and inflammation associated with myelin diseases to identify novel therapeutic targets (Elisabeth Traiffort);
2) the transcriptomic analysis of pro-myelinating effects of testosterone (Abdel Ghoumari);
3) the characterization of myelin production in a novel murine mutant (Catherine Le Stunff);
4) the development of recombinant adeno-associated viruses that could be used in the context of inherited myelin pathologies (Patrick Aubourg);
5) the identification of innovative therapies for the treatment of local inflammation associated with cerebral aneurysms (Laurent Spelle and Elisabeth Traiffort).

inflammation in the central nervous system

Elisabeth Traiffort is neurobiologist. Her scientific carrier started after 4 years as pharmacist in AP-HP (Assistance Publique-Hôpitaux de Paris). After a first interest in the field of histaminergic or serotoninergic neurotransmission and G-protein coupled receptors (1988-1996), she moved to the investigation of the first signaling pathway that was identified in the genetic control of early embryo development, the Hedgehog signaling. From 1998, her collaborators and herself revealed the persistence of Hedgehog pathway in the postnatal and adult central nervous system. They notably showed the transport of Hedgehog proteins in axons, their ability to control electrophysiological properties of neurons and the role of the pathway in the cell division mode of the adult neural stem cells. In 2013, while she had just revisited the involvement of the Hedgehog signaling pathway during myelin regeneration, she joined Kremlin-Bicêtre Hospital, where she was proposed as the leader of the team ‘Myelination and Myelin Repair’ that became in 2018 the team ‘Glial Cells, Regeneration and Plasticity’.

The present project is aimed at delineating the molecular and cellular mechanisms implicated in the process of developmental and repairing myelination. The two signaling pathways that are currently studied include the pathways triggered respectively by the secreted proteins Hedgehog and the steroid hormone testosterone. The project relies on the genetic and pharmacological manipulation of these pathways during development and in various murine models of demyelination. The group is also focalized on local inflammation associated with myelin pathologies and other CNS diseases. Ultimately, the objective is the finding of new therapeutic targets in the field of myelin diseases and inflammatory CNS pathologies.

Roles of androgens and progestagens on myelin

My research topic is to investigate the role of natural and synthetic small molecules such as steroids, progestagens, and androgens in myelin development and myelin regeneration, using in vitro, ex vivo, and in vivo models of multiple sclerosis (MS). Also, we are studying the importance of these steroids in the setting up of myelin dimorphism. This makes sense as the MS is a sexually dimorphic disease, whose evolution is influenced by the endocrine profile of SEP patients. Our previous work has shown that progesterone and testosterone, via their respective nuclear receptors, are very important for the regeneration of myelin in the demyelination model of mouse spinal cord and organotypic cultures of rodent cerebellum. Similarly, the effect of testosterone via its nuclear receptor (AR) is permanent on sexual dimorphism of myelin (figure below). To understand how steroids influence myelination and remyelination, we are studying in detail their mechanism (s) of actions by the determination of the signaling pathways and the target genes. For this, we use a molecular approach based on the analysis of transcriptomes between male and female mice and between intact and demyelinated mice, treated or not with steroids. The functionality of each of these target genes is studied in mice after confirmation in vitro and / or ex vivo culture. 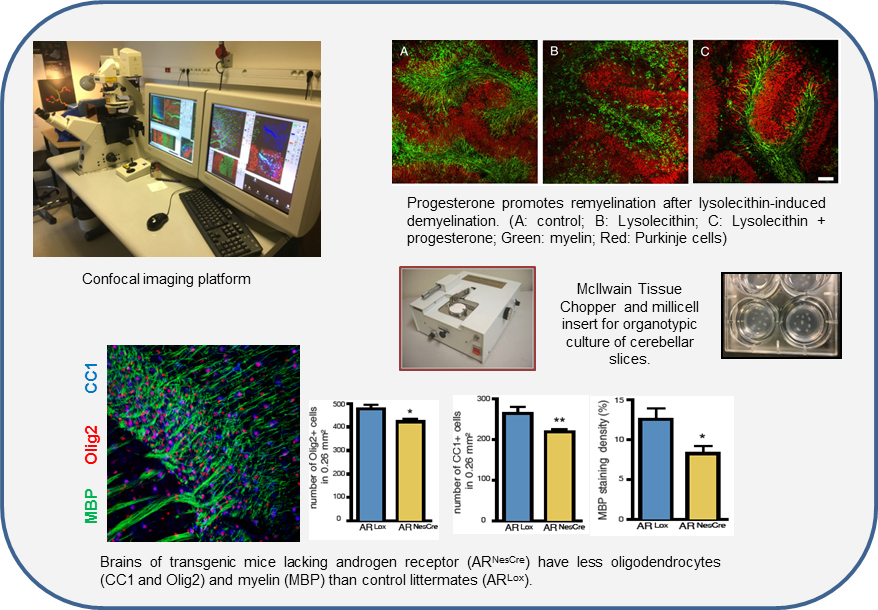 We use postnatal and prenatal AAV gene transfer to transduce brain and spinal cord oligodendrocytes in mouse disease models and in non human primates as preclinical models for the gene therapy of X-adrenoleukodystrophy, adrenomyeloneuropathy, Krabbe’s disease, and more generally demyelinating diseases or axonopathies. We also develop a program of AAV mediated gene therapy directed at mitofusin deficiency (Charcot-Marie Tooth 2). We design and build plasmids with specific CNS expressing promoters and use all techniques allowing gene expression to be quantified in these animal models.